Abbey of San Salvatore
and San Lorenzo in Settimo

The Abbey of San Salvatore e San Lorenzo is one of our national heritage’s most important monuments.

It stands near the river about 7 miles from Florence’s town centre, on the border between Florence and Lastra a Signa, and just over a kilometer and a half from the Scandicci tollbooth of the Autosole/A1 motorway. It was founded around the end of the first millennium of the Christian Age by the feudal family of the Cadolingi counts, lords of Borgonuovo (the present-day Fucecchio). However, monastic life had already been present there since the late Lombard period, on an island among marshes that had, at one time, been the seat of a pagan cult.

In the Romanesque period, the Cadolingi family sent for the Cluniac monks from France. in the 11th century, Saint John Gualbert’s Vallombrosans were summoned by Guglielmo, known as Bulgaro, a member of the Cadolingi family, the feudatories of that area, and it was during that time that Peter Igneus’s famous trial by fire took place(13 February 1068). This famous trial brought about the end of simony and the success of the reformist policy of Gregory VII (Hildebrand of Sovana).

The abbey reached its greatest splendor in the 13th-17th centuries with the Cistercian monks from San Galgano of Siena, to whom Pope Gregory IX had entrusted it beginning in 1236. From Settimo, they spread throughout the Florentine area, their erudition in every field of knowledge and human activity, according to the most authentic Benedictine style. They also brought to the area the first elements of the nascent Gothic architecture.

Settimo’s abbots were enlightened feudal princes and unprecedented patrons. They promoted the arts and crafts and established both religious and economic relations in Europe and in particular with the Florentine Republic, by whom they were entrusted for centuries with the Seal and the Administration of the Treasure.

In the 14th century, the monastery was provided with powerful fortifications with the contribution of the Commune of Florence that considered it a strategic point and a fundamental junction for the Via Pisana, the former Roman Via Quinctia, the Cadolingio route of the Francigena, and the Arno river that, at the time, was navigable and on which travelled the goods needed for the town.

The monks’ work was instrumental in the regulation and control of waters and its economic exploitation, and in the reclamation and cultivation of the entire plain to the south-west of Florence, including the forestation of Mount Morello. Important reforms spread from the Abbey to other Italian monasteries, and the second Italian Cistercian congregation, after that of Casamari, was born here. It was called the Congregation of Saint Bernard but at the beginning it was known as “of Settimo”, the name of the place where it was founded.

The abbey had periods of decline at the turn of various historical periods, suffering also terrible sieges like the one by Charles V’s lansquenets at the end of 1529. (After a long siege, the imperial troops entered Florence on 12 August 1530).

However, the abbey always overcame these appalling tragedies, regaining the ability to create art and culture.

In 1783, at the peak of the pre-revolution period totally opposed to the monastic rule, the ominous suppression carried out by Grand Duke Pietro Leopoldo led to splitting the monumental complex into two properties, selling almost two-thirds of the monastery and all its lands to private parties, the banishment of the monks with the consequent scattering of its vast artistic heritage, and the removal of its archives to other locations.

The north-east part also incorporated the parish title of San Lorenzo in that of the San Salvatore abbey, falling under the authority of the archbishop of Florence who subsequently appointed its priors. The south-west part was transformed into a farm and was used as such by its private owners until the 1980s. 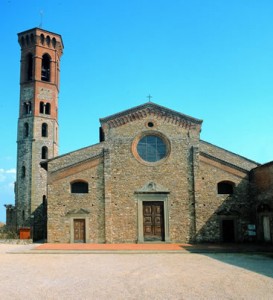 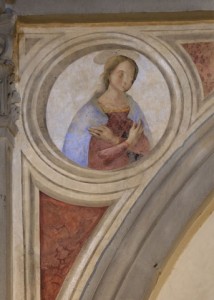 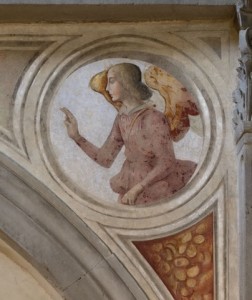 Visits to the restored part are possible on Sunday afternoons from 3.30 p.m. to 6 p.m. or upon reservation for groups.