Museum of Sacred Art
of San Martino a Gangalandi

San Martino a Gangalandi was, in 1986, the first museum of sacred art established in the Florentine district in a synergic collaboration with the State, church authorities, and the Ente Cassa di Risparmio di Firenze, which financed the project.

Adjoining the church, the building is set against the imposing bell-tower and used to be the seat of the Societas Beatae Virginis Mariae Communis Gangalandi, founded in the 13th or beginning of the 14th century, following the intense reformation movement set in motion in Florence by Saint Peter Martyr (Verona 1205-Seveso 1252) of the Dominican Order. He was a tireless advocate of the Catholic religion against the Cathar heresy. During his stay in Florence in the Convent of Santa Maria Novella, he founded in 1244 what today is the Venerable Archconfraternity of the Misericordia of Florence, the first of its kind.

The building has been reorganized according to the new exhibition needs. Works from both the Church of San Martino and its suffragan churches are found on the two floors.

The painting by Lorenzo Monaco depicting the Madonna of Humility from the first decade of the 15th century is among the museum’s most noteworthy works.

Next to it is a triptych attributed to Lorenzo di Bicci (documented in Florence, 1370-1409) and to his son Bicci di Lorenzo (Florence 1368 –Arezzo 1452), outstanding artists in Florence during the first decade of the Renaissance.

The work depicts a subject dear to Florentine art, the Virgin giving her girdle to Saint Thomas. On the side panels are Saints Nicholas of Bari, Andrew, John the Baptist, and Anthony the Abbot. Although inspired by 15th-century models, the frame is a modern work from the last decade of the previous century.

The Madonna and Child by Jacopo del Sellaio is extremely important for its realistic Renaissance setting constructed by interior details. The panel has been recently restored (2010). Between mother and child an intense exchange made of loving gestures and tender hugs passes between the mother and child.

On the wall near the staircase to the upper floor is a painting subdivided in three panels, the Decollation of John the Baptist between Saints Francis of Paola (Paola 1416 -Tours 1507, Order of Minims, canonized in 1519 by Leo X), and Carlo Borromeo, (Arona 1538 – Milan 1584, archbishop and cardinal, canonized in 1610 by Pope Paul V). The latter’s 1610 canonization allows us to date the work to around the second decade of the 16th century, showing archaic traits that can be found in the works of such artists as Filippo Paladini.

From a 1636 inventory, it can be inferred that the painting was the crowning achievement of Ceraiolo’s work. Still on the ground floor, a display case contains a 19th-century monstrance, an excellent work from the mid-19th century that drew inspiration from the Italian revival. View of the Church of San Martino a Gangalandi 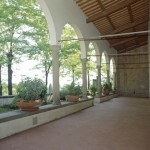 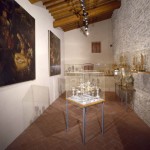 The Museum of Sacred Art Detail of the facade 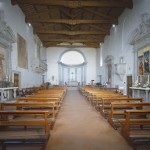 Interior of the Church of San Martino a Gangalandi 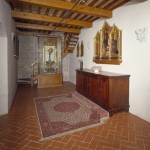 How to get there:
By car: Take the FI-PI-LI highway and exit at Lastra a Signa. Follow the signs to the town centre along Via Livornese, turn into Via San Martino that then becomes Via Leon Battista Alberti.