Museum of the Basilica
of Santa Maria delle Grazie

The recently re-furbished museum is housed in a building that adjoins the complex of Santa Maria delle Grazie. Many of the works preserved in the museum come from the Church of San Lorenzo. The core of the museum had already been created in the basilica’s sacristy beginning in 1864, thanks to the generous work of Vincenzo Mannozzi Torini, a representative of one of San Giovanni’s most illustrious families.

The controversial events of the post-Unification suppression of religious congregations are behind this museum’s origin, as is the case for many other Italian museums. Often, those events brought about, together with the alienation of religious buildings and furnishings, the loss of a true devotional, artistic and historical heritage.

In the case of San Giovanni Valdarno, Mannozzi Torini’s far-sightedness was followed by the then Florentine Superintendency’s zealous action. During the 1950’s, the works were placed in the building adjacent to the Oratory, which had been restored for that express purpose. Luciano Berti catalogued and added to the collections.

Subsequently other works of art entered the museum’s collections, including Fra Angelico’s Annunciation, which came from the church of the Franciscan convent of Montecarlo, located not far from San Giovanni. Recent renovation works were begun in 2000 and finished in 2005, which enlarged the exhibition areas – with the addition of three new halls – and brought the rooms into conformity with the new safety standards.

The museum houses paintings from the 14th to the 17th centuries, as well as liturgical silver works, vestments and hangings, and other objects of great importance to San Giovanni and its district.

A ramp leads from the ground floor to the piano nobile, where the entrance/ticket office is found along with a small bookshop. An important silver work, a large Baroque frontal by Bernardo Puccini introduces the collections in the other halls.

After the entrance, the halls proceed on a single floor at slightly different levels, connected by short ramps. The first, second and third halls house panels of religious subjects by Tuscan masters, ranging from the late 14th century into the following one.

The passageways between the third and fourth halls have display cases with silver works. Fra Angelico’s Annunciation is exhibited in the fourth hall. The main subject, the Annunciation of the Virgin, is described according to conventional iconographic schemes, inside a prized structure. The scenes on the predella depict the Virgin’s Wedding, the Visit of Mary to Elizabeth, the Adoration of the Magi, Jesus Being Presented at the Temple, and the Transit of the Virgin.

The attribution of the altarpiece, from the church of the Franciscan convent in Montecarlo, had long been controversial. Following a restoration carried out at the beginning of the 1970’s under the direction of Anna Maria Maetzke, it was definitively attributed to Fra Angelico. 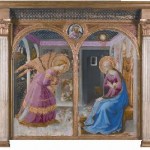 The main theme, the Annunciation of the Virgin, is described according to conventional iconographic schemes, inside a noteworthy structure. The scenes on the predella depict the Virgin’s Wedding, the Visit of Mary to Elizabeth, the Adoration of the Magi, Jesus Being Presented at the Temple, and the Transit of the Virgin 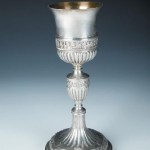 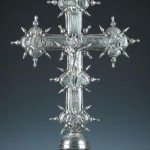 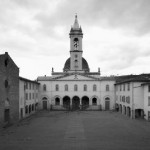 Museum of the Basilica of Santa Maria delle Grazie 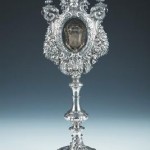 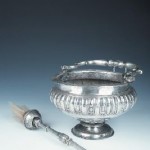 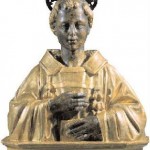 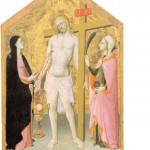 Christus patiens between the Virgin and Saint Lucy; on the predella: Saints Sylvester, Michael the Archangel and Ives 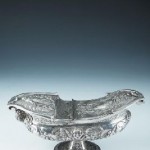 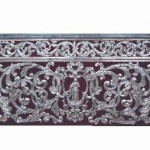 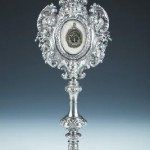 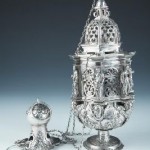 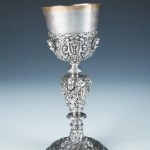 Pair of crowns for a painting 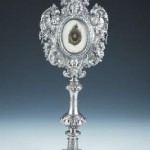 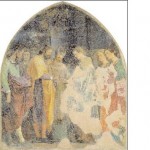 How to get there:
By car: Motorway A1 (Florence-Rome/Rome-Florence); exit: Valdarno.
Firenze Sud-Valdarno: Km 35
Arezzo-Valdarno: Km 22

Accessible for the differently-abled
Bookshop