This small but important museum was opened in the 1970s thanks to the joint efforts of the Diocese and the town government. It is housed in three ground-floor rooms of a building adjacent to the church.

From the very beginning, at the heart of the initiative was the desire to rebuild, in the immediate vicinity of the church, the Della Robbia Tempietto for the relics of the Holy Milk that had been dismantled during 18th-century renovation work. Religious objects from buildings in the area as well as from the Collegiate Church of San Lorenzo had been gathered and displayed around the Tempietto.

In 1974, the 16th-century fresco by Luberto da Montevarchi, detached from Sant’Andrea a Cennano and depicting a Nativity and a Madonna and Child with Saints, was added to the collections as well as another important fragment of the Madonna with the Book and two angels.

Today, a museum enlargement is being planned to allow the objects to be better displayed and seen, and to offer educational activities. The entrance to the museum is to the right of the collegiate church’s façade, which enters a courtyard, with the exhibition rooms on the right.

The first hall is beyond the reception area, and houses many of the most important works: paintings, vestments and hangings, and liturgical silverworks as well as altar devices and wooden furnishings related to the main relics of the sanctuary.

The museum’s second hall is intended to document—around the Tempietto of the Holy Milk relic, which was reconstructed in the 1970’s—the Della Robbia production, carved works in stone, and some important moments in the history of the Sanctuary.

The Tempietto, or more exactly the Chapel of Saint Mary of the Milk, was decorated by Andrea della Robbia with “marzacottos of his production” (Pesci, 1999) between 1595 and 1598. It includes the bas-relief of the relic’s consignment, which was originally found on the collegiate church’s façade. The relic’s chapel consisted of an altar placed against the counter-facade, protected by a baldachin resting on the altar wall. Through an iron gate, the altar was connected with a small room at the back, commonly called “the closet of the relics”, where the Holy Milk was kept.

Dismantled during the restoration work carried out by Massimiliano Soldani Benzi in 1709, the reliefs were reassembled in 1970on an architectural structure that faithfully reproduced the original one. 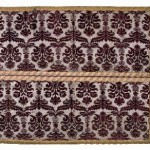 The decorative module of this frontal, which covers the front part of the altar, was carried out using the costly technique of a chiseled velvet on a silver cloth. It has also been iconographically documented by the chasuble worn by Saint Philip Neri in the famous painting “Saint Philip Neri’s Vision”, by Orazio Fidani. 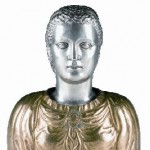 The reliquary, depicting one of Saint Ursula’s virgin companions, was commissioned by the members of the Brotherhood of the Milk (1589). The young girl is depicted wearing a robe and a mantle fastened on the front with an oval bearing Saint Bernard’s monogram. There is a lid corresponding to the skullcap. Some bone fragments are kept inside. Of refined German production, the cup is in gilded silver and is one of the most valuable objects in the Montevarchi Museum of the Collegiate Church. 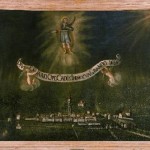 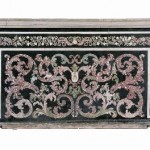 This frontal is a parament made of marble, carved stone, ivory, or embossed, chiseled metal or else silk, used to cover the front part of the altar that, as it is sacred, must not be visible. This frontal from Montevarchi is made of scagliola, used frequently in the 17th century to imitate various kinds of marble. 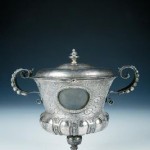 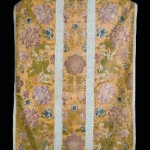 The decorative motif suggests the upward movement of two branches covered with peonies, dahlias, irises and bluebells, interspersed with luxuriant leaves. There is a large separated inflorescence inside the loops. The decorative motif, the emergence of the undulating line, and the toothed leaves recall the style commonly known as “luxuriant”. 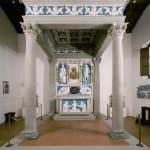 The Tempietto was the focal point of the Chapel of Saint Mary of the Milk, originally consisting of an altar placed against the right counter-façade of the church, protected by a baldachin. In a small room at the back, commonly called “the closet of the relics”, where the Holy Milk was kept. The current reconstruction of the Tempietto was carried out during the 1970 restoration work and faithfully reproduces the original architectural structure. 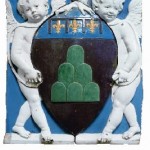 The original position of this coat-of-arms, a work by Andrea della Robbia, was on the façade of the Collegiate Church of San Lorenzo. It depicts the symbol of the town of Montevarchi. 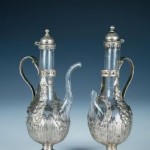 The ampullae, in finely embossed and decorated silver, bear the inscription “benefattori” (benefactors) on the bases, a clear sign they were donated to the Collegiate Church of San Lorenzo by particularly faithful believers. 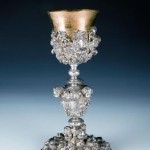 In partly gilded silver, the valuable chalice from Montevarchi was carried out in the 17th century using the various techniques of embossing, chiseling and incision. The baroque decoration displays acanthus leaves and cherub heads (Florentine production, 17th century). 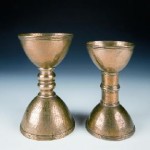 These gilded copper cups probably contained the secret votes written by the members of the Brotherhood of the Holy Milk. 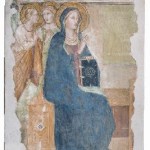 Madonna of the Book – First hall

The fresco came originally from a chapel in the hamlet near Montevarchi called “del Lavacchio”. It portrays the Virgin holding a closed book in one hand, and blessing with the other. The episode could be identified as the one in which the Madonna consoles Saint John the Damascene in jail. 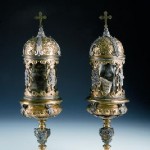 Reliquaries in the shape of a tempietto – First hall

The cups of this pair of silver tempietto-shaped reliquaries with gilded parts have chiseled and embossed pod-shaped decorations of Tuscan production from the first half of the 17th century. 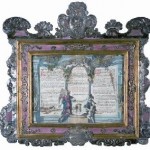 The cartegloriae derive their name from the prayers printed on them which the priest says during the mass. These tablets, at one time in lacquered wood decorated with gold leaf, were later made with valuable metals like this one from the Collegiate Church of San Lorenzo which also displays, in the centre of the lower border of the frame, a coat of arms with the initials of the Brotherhood of the Holy Milk. 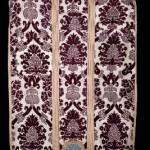 This chasuble, together with a cope and tunicles, was part of a four-piece set of vestments commissioned by the Brotherhood, bearing its embroidered emblem , used on 19 March 1679 to celebrate the Holy Milk Feast solemnly. Hand-sewn by Domenico Monaldi, a maker of sacred vestments and hangings, it is trimmed with gold lace by the gold-beater Vincenzo Salvi. 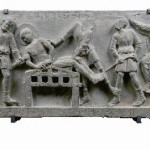 The stone bas-relief depicts a lively scene of the saint’s martyrdom on the gridiron, executed before Emperor Decius who is sitting on a chair decorated with faux overlapping arcades. Of dubious attribution, The relief is owed either to a Tuscan workshop or to Giroldo da Como. 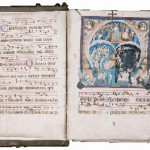 This antiphonary contains the antiphons and versicles said before the psalms or other prayers in the catholic liturgy. It includes the Last Judgment by the Master of the Laud Book. 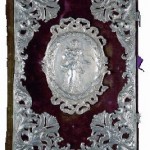 The liturgical book, with a traditional binding in red velvet with small embossed silver plaques, is decorated with botanical volutes. In the centre, the Madonna and Child are depicted in an oval framed by a ribbon-like motif and a botanical wreath. 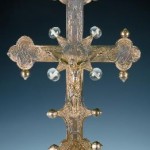 The processional cross is also called “astile” in Italian because it is usually placed at the top of a long staff to be carried in processions. This one from the Collegiate Church of Montevarchi, in gilded copper and adorned with rock crystal spheres, displays incised and embossed motifs both on the recto and the verso. Incised in the quatrefoils are the figures of the Virgin, Saint John the Evangelist, the pelican nourishing its chicks, the symbol of Christ’s sacrifice, and Adam’s skull, an allusion to the Crucifixion. 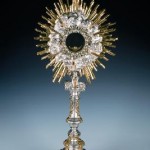 This finely worked monstrance is one of the Collegiate Church of San Lorenzo’s most beautiful examples of Tuscan production. 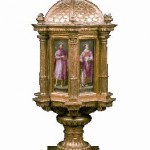 Commissioned by the Brotherhood, it probably kept the relic of Mary’s Milk, a gift to the Church of San Lorenzo from Count Guido Guerra. In the shape of a hexagonal tempietto, surmounted by an elegant small cupola with a lantern, the reliquary presents the saints and personages linked to the story of the collegiate church in the central part. Giovanni del Brina, who decorated the work, shows Andrea del Sarto’s stylistic influence. 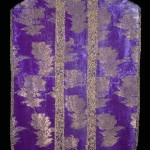 The decoration consists of two large golden inflorescences that, standing out on a red lamé background, are placed on horizontal parallels. This decorative module falls within the textile typology of an “isolated motif ”, i.e., one where the ornamental elements are separated from the background because of the elimination of contour motifs. The painting depicts the Guidi family tree. In fact, Count Guido Guerra of the Guidi Counts, Lord of Montevarchi, gave the cherished relic of the Holy Milk which he had received from Charles of Anjou to the provost of the Church of San Lorenzo, thus forming a close tie with Montevarchi and entering the collective memory. Another example of this is shown by one of the Della Robbia works kept in the museum which tells the story of this illustrious knight. 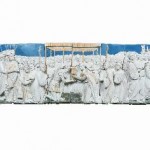 The Consignment of the Relic– Second hall

Originally placed on the collegiate church’s façade, this grand bas-relief, depicts in its centre Count Guido Guerra giving the prior of San Lorenzo the holy relic of the Madonna’s Milk, received from Charles of Anjou, who is recognizable among the various personages because of the fleur-de-lis decoration of his robe. On the left are nobles and soldiers with a group of clergymen walking towards the church on the right.

How to get there
From Florence or Rome: Valdarno exit on the motorway A1 Florence – Rome , turn right following the signs for Montevarchi. The town is only 2.5 Km far.
From the Chianti: State Road SS408 Chiantigiana.

Accessible to the differently-abled.