The Stibbert Museum is one of the most fascinating and surprising places in Florence. In the museum-house, created by its owner, Frederick Stibbert (1838-1906), are gathered and arranged according to an exciting and rich with drama disposition, its exceptional collections which Stibbert left upon his death to the city: in particular the famous collection of arms, but also objects of art and daily life from the European, Islamic and Far Eastern civilizations, especially the Japanese one.

The museum is testimony to the taste and intelligence of an individual and at the same time it represents the synthesis of the highest cultural values of the 19th century: an interest in the past, a glorification of art and a passion for the exotic. This villa, lying on the slopes of the Florentine hills, was transformed by Stibbert into a neo-Gothic castle, with spacious rooms on the ground floor meant to house the collections in the spectacular style and the sequence conceived by him.

The other part of the building houses the sumptuous private apartments, furnished and decorated according to the nineteenth century standards, which made every room re-evoke a different style: neo-Renaissance for the ballroom, Rococo for the parlors, Empire for the bedrooms. The same eclectic taste, the same curiosity for the past and the exotic characterize the park which surrounds the villa.Groves, pavilions, statues, fake ruins and a small Egyptian temple mark or are the destination of naturalistic and/or evocative itineraries, only apparently casual: a romantic vision of the garden that bears witness to Stibbert’s further adhesion to the cultural ambience of the time.

The armory
In a large Gothic style hall, deliberately designed, the 16th century knights, closed in their suits of armor, bring to life an imposing cavalcade, in which the poses of the warriors and their horses draw inspiration from large equestrian monuments or historical personages, such as Emanuele Filiberto of Savoy or Emperor Maximilian of Austria.

Another small army, dressed in precious fabrics and mail, bears witness to the diverse conception of armament typical of the Islamic world, which stretches from north Africa, to Central Asia as far as India. Equally suggestive is the section dedicated to Japan, with its colored and fantastic warriors and the extreme elegance of clothes and furnishings. In addition to the suits of armor, the arms and the horse harnesses, the collection includes bronzes, costumes, lacquer ware: for its richness and the quality of its pieces, it is considered one of the most important collections outside of Japan.

The other collections
If the armors of the various peoples are used to testify to the victories and the defeats that have marked and determined history, on the other hand, the daily or artistic objects that accompany them serve to restore their life and their meaning. Stibbert collected everything, but especially what was relevant to a person and formed one’s image of them, revealed one’s value, such as the garments.

He bought important paintings but preferred those, also by unknown artists, that illustrated the history of costumes, the arms worn, and the clothes in the style of suits of armor . The tapestries which decorate the walls of the villa were chosen for their subjects with the same illustrative criterion. Some absolutely exceptional examples, such as the 16th century garments,the accessories and the suit worn by Napoleon for his coronation as the king of Italy can be found among the clothing.

Exceedingly rich is the collection of objects from the applied arts which Stibbert used to furnish his museum-house, especially in the private apartments, which includes furniture, majolica, fabrics, 17th century stamped and painted leathers and sacred hangings which complete a collection absolutely unexpected by the visitor.

Dress for the Body: Body for the Dress: When Islamic and Western styles meet all’Islamic Art Museum 2000 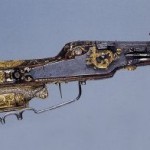 The weapon is muzzle-loading (the pellets were pushed from the front into the barrel with a stick), and the gunpowder is put in the central pan over the wheel. The wood case has a beautiful mother-of-pearl inlay decoration. 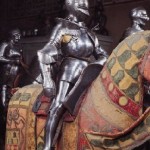 Plate armour with helmet fitted out with visor. 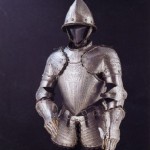 The corselet was used by the guards of the Grand Duke of Tuscany. The decoration, using the etching technique and then darkened and gilded, is typical of Pompeo Della Cesa’s production, already acknowledged by his contemporaries as a skilled and highly inventive armourer. 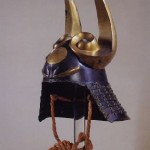 Simple round helmet without a visor on which curved horns are painted. The silk laces are purple red and all the metal parts are lacquered in black (ro-iro). The horns are gilded and there is a gilded sun on the front. It was classified as a “buffalo-head” helmet. 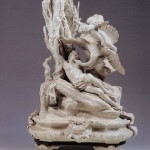 Leda and the Swan

It is perhaps the only surviving exemplar of this work by Massimiliano Soldani Benzi (Montevarchi, Arezzo 1656-Galatrona, Arezzo 1740). On the base is a scroll with the inscription: (A)RTIUM MEDITANTUR AMOREM IUPPITER. The wax model is found in the Doccia Museum.

The painting depicts the saint according to the traditional iconography: he is winged and wears armour and has the sword with which he defeats the devil. In his hand, he is holding the scales used to weigh the souls.
The work is part of an altarpiece whose fragments are: Saint Peter, in the Victor D.Spark collection in New York, and the Madonna and Child sitting on a cloud with a mandorla behind her shoulders, property of Alfredo Barsanti from Rome. 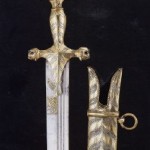 This is one of the many swords belonging to Tipu, the sultan of the Mysore Region in southern India (1782-1799). The pommel of the Indo-Muslim silver hilt depicts a tiger. There are smaller tiger heads on both sides. The blade is curved and has only one edge; three thin grooves are displayed on each side.

Suit of armour with bust in two sections

Complete suit of armour with braided, azure silk fastenings set very close together. The plates are covered with gilded “Chinese” leather, decorated with stamped flower and leaf motifs. The helmet is low and round and the crest is in the shape of silver horns. The Nara Mempo mask has a bristly white mustache and a wide throat-piece. 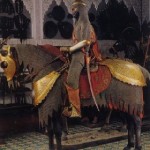 Indian suit of armour for man and horse

The horse armour has square-notched borders; the crownpiece covers the horse’s entire head except for the ears. Both these parts are adorned with lacquered ornaments decorated with gold lamina. The horseman armour consists of an iron coat of mail and breeches. The circular upper part of the helmet is decorated with gold ribbons interlaced with botanical motifs. The knee-high boots are in decorated red velvet.

The cuirass was placed in the Stibbert Museum after the opening of the Medici tombs in 1947. 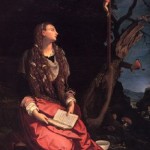 In this penitent Magdalene, the artist makes the traditional iconography more severe by eliminating the excesses of the nakedness, the skull, the whip and even the hair shirt, transforming the sinner into a refined dignified lady who looks after herself with care. Her famous hair, usually loose, is gathered and plaited. The light glides over the embroidered blouse and shawl. It is a mature work by this artist, depicting a subject dear to him that he painted many times. 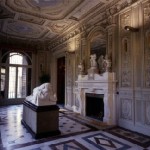 Loggia of the Stuccos

The Buddha (a kind of Enlightened One, the Awakened One) is presented following a simple iconography: standing and dressed in a monastic habit covering his left shoulder. He has some characteristic traits such as the elongated earlobes, recalling the nobles of Ancient India whose ears were lengthened by the weight of their jewels. The throne is a lotus flower, the seat of the Awakened One.

This horseman’s armour is from Sind, a region between India and Pakistan. 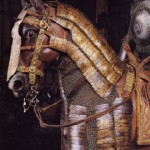 The crownpiece (or armour for a horse’s head) consists of a mail of gilded metal lames.
This eastern work, like the others, was acquired at the old Turkish arsenal of Hagia Eirene when the latter was transferred to the Topkapi Sarayi museum. 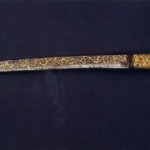 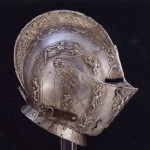 The helmet is made up of two sides soldered together with a flat crest. All the parts, except for the crest, are decorated with gilded bands stamped and embossed with nude figures and fruit and flower triumphs. 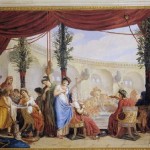 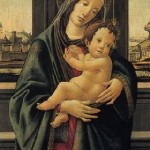 Behind the Virgin and Child, two windows open on to a landscape. This painting, overlooked by critics and never mentioned among the painters’ works, is attributed in this collection to Botticelli. Its quality suggests either an autograph or a work related to his workshop. 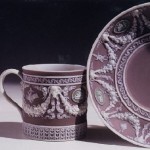 Mauve and white coffee cup and its saucer with five oval-shaped green and white medallions. The decoration consists of billy-goat heads and flower garlands. The brand name does not appear on the cup, but rather on the saucer.

How to get there
By car: from the centre of Florence, follow the signs to Rifredi/Via Bolognese.

The visit lasts about one hour and is with a museum attendant. There is one every hour.
There is a maximum of 25 people per group. The excess visitors are included in the following group.

For groups of over 6 people, we recommend booking a reservation by phoning 055475520 or by email at biglietteria@museostibbert.it

Reduced price: € 6.00
(civilian invalids, children under 12, those over 65 years of age who reside in Italy, tourist guides with license on refresher courses, classes of university students, classes from restoration schools)

Royal Armoury of Turin
[Museum] go to the site