The Museum was founded in Arezzo in 1957, following an agreement between the municipality of Arezzo and the Ministry of Education, at the time in charge of the “Fine Arts” , regarding the management of the Municipal Picture Gallery’s collections, which were mainly the result of the suppression of the religious orders and the acquisition of the Bartolini, Funghini, and Fossombroni collections; and, generally, of all the historical collections belonging to the Fraternita dei Laici.

The latter had entrusted them to the city already by 1934-35. Numerous loans by the Florentine Galleries have added to the initial core collections, including the more recent 1964 bequest of the Salmi collection to the State, which was expanded in 2010 with a new donation from the heirs.

Since the war, following a series of complex events, the collections were gathered in the present location, Palazzo Bruni Ciocchi, also known as “della Dogana”. A ministerial decree dated 7 October 1972 finally established the two state museums in Arezzo: the Archaeological Museum in the former Convent of San Bernardo and the Museum of Medieval and Modern Art.

The museum is divided into twenty rooms on three floors. The works are arranged chronologically, going from the Middle Ages to the 19th century.

The building’s popular name of “della Dogana”, (i.e., Customs) refers to the time when it was occupied by the State Monopolies. The post-war restoration work lasted for many years and returned the palace to its stately appearance.
Construction of the palace in the mid-15th century, incorporating pre-existing 14th-century buildings was began by the family of Leonardo Bruni, chancellor of the Florentine Republic and renowned humanist.
Also dating back to this period is the large colonnaded courtyard, which has retained its Renaissance aspect and may be accessed from one of three entrances on Via San Lorentino.

At that time, the neighborhood revolved around Canto de’ Bacci where the church dedicated to the martyrs Laurentinus and Pergentinus stood, downhill from the Duomo and the Camaldolese Church of Santa Maria in Gradi. Unlike today, the part of the town, which corresponded to the city entrance through the gate in the direction of Florence known as San Lorentino, was a crowded and well-trafficked area. Ownership of the palace then passed from the Bruni family to the Ciocchi del Monte family of Monte San Savino. From the 17th to the 19th centuries, it then belonged to the Barbolani family of Montauto, who were originally from the Valtiberina.

The administrative offices and the courtyard are home to some valuable stone objects: architectural fragments from the city’s religious buildings, including its parish church as well as other civil structures. Particularly worthy of attention are the protomes of a lion and of two horses, discovered in the 1930s during restoration work on the Arezzo aqueduct. Built in the late 16th century by order of Ferdinand de’ Medici, this aqueduct has usually been associated with a design by Vasari.

The water, which originated in the Alpe di Poti area, flowed into the open at La Godiola. There, it entered the still-existing system of arches, arriving in Piazza Grande. Originally, these protomes were part of a system of interconnected tanks. The water from a large reservoir exited through the horses’ jaws to then be collected in another basin, with the lion’s head regulating the outflow.

The main element of these distinctly Mannerist sculptures is their classical derivation. The same characteristics are found in a smaller protome that comes from the Praticino area. It is mounted on the fountain in the museum’s courtyard. Going up the monumental staircase, we find Girelli’s large painting (1696) with its view of the aqueduct. 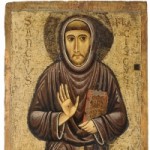 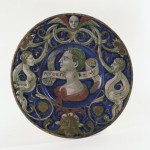 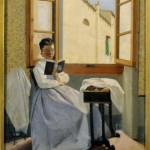 Putto for a fountain 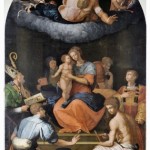 Madonna and Child with Saints known as the San Rocco Altarpiece 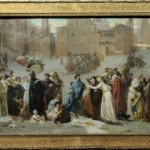 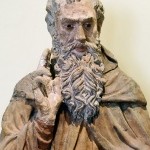 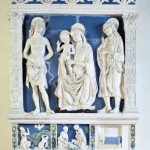 Madonna and Child with Saints Sebastian and Julian

On the predella: the Stigmata of Saint Francis, the Nativity, Saint Julian Killing his Parents. Coppa with the “Figure of a Beautiful Woman” 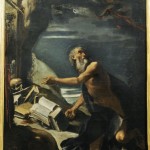 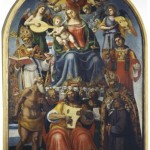 Madonna in Glory with the Child, Saints and Prophets, and the Patron Niccolò Gamurrini 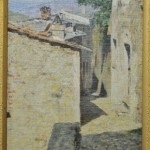 View of Arcola in Lunigiana

Madonna and Child between Saints Agnes and Catherine 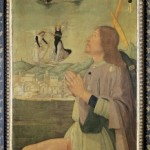 Saint Roch Protects Arezzo from the Scourge of the Plague 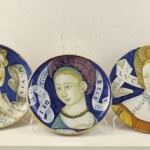 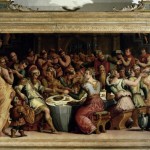 The Feast of Esther and Ahasuerus 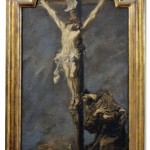 The Crucifixion with Saint Francis 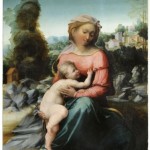 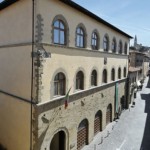 As of 1 June 2012, entrance to the National Museum of Medieval and Modern Art is free.