A museum and a monument, a place of memory and a celebration of the genius of Michelangelo, set in a magnificent baroque setting where the family’s rich art collections are exhibited, the Casa Buonarroti is one of the most unique Florentine museums to visit.

To begin with, it provides the thrill of admiring two famous marble reliefs, masterpieces from Michelangelo’s early years, the “Madonna of the Stairs”, evidence of his intense passionate study of Donatello, and the “Battle of the Centaurs,” an eloquent sign of his never-fading love for classical art.

Yet no less significant for those walking through the main door of the 17th-century palace at Via Ghibellina, 70, in Florence, is the connection of Michelangelo’s works to the Buonarroti family’s centuries-old history, endeavored to expand the dwelling, to embellish it, to preserve there a valuable cultural heritage (including the major Archives and the Library), by assembling rare collections of art: paintings, sculptures, ceramics, archaeological finds that are now arranged over the museum’s two floors.

A specially equipped room displays, on a rotating basis, selected small groups from the Collection of autographic drawings by Michelangelo which belong to the museum and consists of two hundred priceless sheets. The meaning of the Casa Buonarroti is not limited, however, to a celebration of such an exceptional figure as that of Michelangelo, although this museum has and exhibits works and documents about him that have been enriched by donations to the family’s patrimony and by pieces on loan from Florentine museums.

These include two famous works by Michelangelo: the wooden model for the façade of San Lorenzo and the magnificent River God, preparatory to a statue for the New Sacristy that was never carried out. There are the two 16th-century Noli Me Tangere, derived from a now-lost cartoon by the artist.

The idea of creating a grand building to the glory of the family and especially of the great forefather goes back to Michelangelo Buonarroti the Younger, a great man of letters and patron of culture who, beginning in 1612, for about thirty years, employed the leading artists working at that time in Florence, including Empoli, Passignano, Artemisia Gentileschi, Pietro da Cortona, Giovanni da San Giovanni, Francesco Furini, and the young Jacopo Vignali, to carry out work inside the palace, and especially in the “Gallery” and the three rooms nearby.

In these sumptuous rooms, Michelangelo the Younger placed the most valuable pieces of his collection, many of which are still part of the museum. Included among them, the wooden predella with Scenes from the Life of Saint Nicholas of Bari, a masterpiece by Giovanni di Francesco, a follower of Domenico Veneziano.

Let us not forget the museum’s annual exhibitions on topics related to the Casa Buonarroti’s cultural and artistic patrimony and to its memories, as well as to Michelangelo and his times: exhibitions that, for many years, have achieved international fame for the authority and originality of the issues addressed. 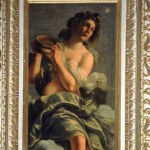 The painting is part of the allegories, in the ceiling of the Casa Buonarroti gallery, that represent some episodes from Michelangelo’s life. The female figure, who has recently earned the well-suited definition of a “luminous and carnal nude” (Cropper), is holding a compass, while a shining star in the blue sky seems to be her guide. 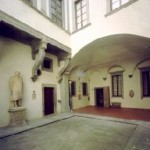 Filippo Buonarroti recalled in 1726 that his “ancestors” had embedded in the walls of the Casa Buonarroti courtyard an Etruscan stele, found near Fiesole. It was returned to Florence’s Archaeological Museum in 1965. The painting is among the allegorical frescoes dedicated to Michelangelo Buonarroti’s life in the Casa Buonarroti gallery, where prominent episodes from Michelangelo’s life are illustrated. In particular, the painting depicts the moment in which the artist is presenting to Pope Leo X and Cardinal Giulio de’ Medici the proposed models for the façade of San Lorenzo and of the Medici Chapel.

Upon Michelangelo’s death, Daniele da Volterra created a portrait from the artist’s death mask, with whom he had shared an intense friendship. When Daniele died, six bronze heads of Michelangelo were found in his shop. One of them came to Florence, and was provided with a rich drapery, designed by Giambologna. The Casa Buonarroti bronze is considered one of the most important examples of the most famous sculptural portrait of Michelangelo. This portrait of Michelangelo is located in the Camera della Notte e del Dì. This painting is usually identified with Michelangelo’s portrait by Bugiardini of which Vasari spoke at length. 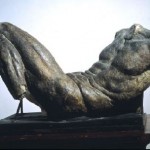 River God – Works from the gallery

This piece is a preparatory model for a sculpture that Michelangelo had planned to put on the floor of the New Sacristy. The work, of which the piece of Casa Buonarroti is the model, should have been placed at the foot of Lorenzo de’ Medici’s tomb. Tolnay has discovered a copy of the sketch in a 16th-century drawing in the Uffizi and has hypothesized that it is a river god. 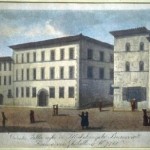 Casa Buonarroti in an 1862 engraving

By the hand of Michelangelo the Younger, In Manuscript 97 is the layout for the frescoes on the walls with an indication of the episodes and characters related to the family Buonarroti who were to be depicted. Among others Jacopo Vignali painted a fresco on the ceiling, of the Eternal Father separating light from darkness, and the personifications of Night and Day, which gives this “chamber” its name. 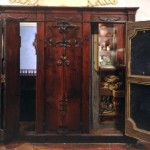 Michelangelo Buonarroti the Younger was a great and remarkable man of letters and a lover of culture.

The painting is one of the allegorical frescoes dedicated to Michelangelo Buonarroti’s life in the Casa Buonarroti gallery, in which important episodes from Michelangelo’s life are shown. In particular, the painting depicts the moment in which the artist presents Pope Paul IV a model for the completion of St. Peter’s. According to Baldinucci the two characters portrayed behind Michelangelo are Luca degli Albizi and Giovanni Altoviti

Madonna of the Stairs – Works from the gallery

It is the oldest sculpture by Michelangelo that has been preserved. It was carried out at the age of fifteen when he lived near Lorenzo the Magnificent, at Bertoldo’s school in San Marco’s Medici garden. The female figure occupies the entire height of the relief, from edge to edge. The meaning remains ambiguous of both the stairs that give the relief its name and of the children, the two who appear to be dancing and the other two who seem to be stretching a drape behind the Madonna. 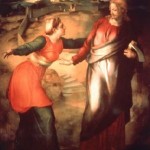 Noli me tangere – Works from the gallery

The work comes from a lost cartoon by Michelangelo, depicting Christ appearing to Mary Magdalene in the garden. The cartoon was made immediately into a painting by Pontormo, at the suggestion of Michelangelo himself who followed closely the work as it took place in his own home.

Portrait of Michelangelo Buonarroti the Younger

Between 1629 and 1630, Michelangelo the Younger was a guest in Rome of the Barberini family. There, he was able to appreciate the portraiture skill of Giuliano Finelli to whom he commissioned this portrait, which was executed in Rome.
Michelangelo Buonarroti the Younger conceived the idea of creating a magnificent building, decorated by renowned artists, for the glory of his family and especially his great grandfather, an idea which he himself brought to completion. 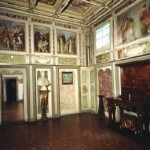 This room was used as a chapel beginning in 1677. The frescoes by Jacopo Vignali and Michelangelo Cinganelli were dedicated to the representations of saints and blessed Florentines to glorify the city’s religious spirit. Michelangelo the Younger’s notes regarding the room’s decoration are preserved in Manuscript 97. 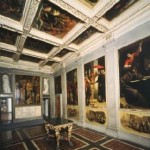 The overall decorative scheme of this room was worked out by Michelangelo Buonarroti the Younger. The common thread is the praise of Michelangelo, an extraordinary biography told through the images created by the most important artists then active in Florence, including Empoli, Passignano, Artemisia Gentileschi, Giovanni da San Giovanni, Matteo Rosselli, and Francesco Furini.

In this famous and beautiful drawing, the desired plasticity of the child’s body contrasts with the vibrant chiaroscuro hatching of the Madonna’s head and of the rest of the composition. The mother’s image has a posture and an expression that are completely detached from the baby at her breast, and a look that is lost in the vision of future tragedies. 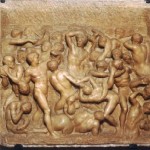 Battle of the Centaurs – Works from the gallery

One of Michelangelo’s greatest masterpieces, he carried it out when he was only sixteen or seventeen years old, “… Upon Poliziano’s advice, the famous man of letters, Michelangelo did a fight between Hercules and the Centaurs on a piece of marble…” (Vasari). 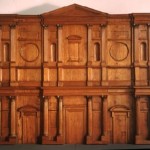 Model for the façade of San Lorenzo – Works from the gallery

Michelangelo had obtained from Leo X the commission to design the facade of the Church of S. Lorenzo. He hid the church’s external structure behind the lay scenario of a splendid private palace.
Tolnay maintains that this was the second model carried out by Michelangelo with Pietro Urbano which was originally equipped with wax figures.

Two Wrestlers – Works from the gallery

The model, whose attribution to Michelangelo is now accepted by most scholars, has been linked to both the Victory statue in Palazzo Vecchio and the large statue of Hercules and Cacus.

The image is part of a single predella portraying three different stories from the life of Saint Nicholas of Bari. 16th-century sources document that this painting was originally placed as a predella below the Annunciation by Donatello, in the Cavalcanti Chapel in the Church of Santa Croce in Florence. Indeed, it fits perfectly between the two brackets that hold the sculpture at the base.

How to get there:
By car: When you arrive in Florence follow the signs to Viali di Circonvallazione, the boulevards, then to Piazza Beccaria (district of Santa Croce).

Laurentian Library:
The Michelangelo project is divided into two areas: the vestibule and reading room, conceived as independently configured spaces and places in succession. The monumental staircase was carried out by Ammannati.